Phones Review Quickie: For those over in the great white space of Canada who have been waiting to snap up the Samsung Galaxy Tab 10.1 Android tablet, the word is the 16GB WiFi only model of the Honeycomb slate is now available for purchase.

According to the guys over at Mobile Syrup, the Android 3.1 Honeycomb tablet launched on a couple of retails on Friday, one of which is The Source, and the guys say Future Shop and best Buy will have stock of the Samsung Galaxy Tab 10.1as of the 26th of the month.

However, according to the article Canadian carriers Rogers, Bell and Telus will all be releasing a 4G enabled Samsung galaxy Tab 10.1 quite soon with rumour saying possibly within a couple of weeks, so you may like to hold off until then.

Having said that if you really want the Samsung Galaxy Tab 10.1 it may pay to grab the Android slate as soon as possibly as no doubt eventually Apple will get round to attempting to have the Galaxy Tab 10.1 banned from Canada as well. 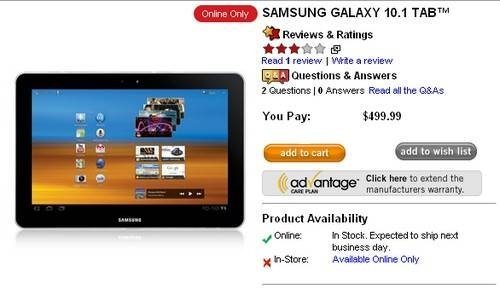