The new iOS 5 Beta 6 was released earlier last week to developers for the iPhone, iPod and the iPad. This new beta update included performance enhancements and bug fixes, now thanks to iH8sn0w the new Sn0wbreeze 2.8b6 for Windows iOS 5 Beta 6 Jailbreak has been released as well.

The new Sn0wbreeze update can jailbreak iOS 5 beta 6 as well as preserving the baseband and hacktivate for the iPhone 3GS and iPhone 4 who relies on the Gevey SIM unlock and Ultrasn0w.

The supported devices and tethered includes: iPhone 3GS new bootrom (Not the old bootrom), iPhone 4 GSM and CDMA, iPod Touch 3G, iPod Touch 4 and of course the iPad 1 (Not the iPad 2).

This new jailbreak update is a tethered jailbreak, as said above the iPad 2 is not supported; you can visit RedmondPie for more information and instructions on how to use Sn0wbreeze 2.8b6. The new iOS 5 Beta 6 can be downloaded via HotFile, you do need to download iTunes 10.5 Beta 6 for Windows in order for the jailbreak to work.

Please stay with us, bookmark us, join us on Facebook, Twitter or my personal Google+ page because more information is coming soon. As you all well know the iOS 5 will be releasing to the public very soon indeed and you really do not want to miss out on all the hot news.

BGR has the full change log of what is new and what has been fixed within the new Apple iOS 5 beta 6 update, definitely worth a look.

According to TechCrunch Apple will apparently be phasing out access to the unique device identifier (UDID), on iPhones and iPads. Basically in a nutshell UDID was used to identify users especially for game networks, mobile ad networks etc, but by getting shot of UDID app publishers will have to create their own UDID to keep track. 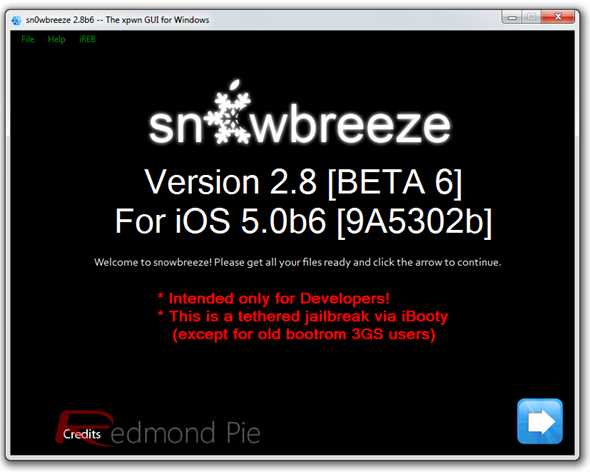 One thought on “Sn0wbreeze 2.8b6 (Windows) iOS 5 Beta 6 Jailbreak, Hacktivate”