Phones Review Quickie: If you are one of the Sony Ericsson faithful over here in the United Kingdom and have your eye on picking up the Sony Ericsson Xperia Ray smartphone, and your preferred carrier happens to be Vodafone, then you might like to know that yes the Xepria Ray handset will be offered by Vodafone in the not too distant future.

According to the guys over at Eurodroid, Vodafone UK now has a coming soon page for the Android packing Sony Ericsson Xperia Ray, a device which no doubt will be offered on Vodafone’s usual monthly tariffs, which could possibly see the device being offered as a free handset.

Obviously as Vodafone has only posted their Sony Ericsson Xperia Ray coming soon page, there’s no word on just when the Android smartphone will actually become available or for how much, however if you are interested in snapping up the device you can of course register for updates on the handset by hitting up here. 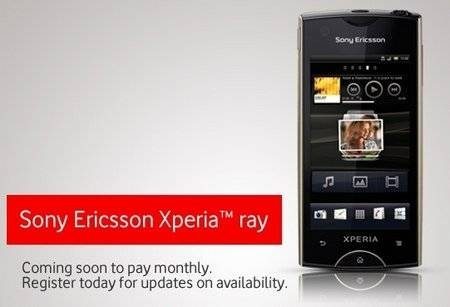