Phones Review Quickie: Although HP has shoved the final nail in the HP TouchPad and said they are to discontinue the tablet along with webOS for mobile devices it appears that many have jumped on the fact that they can now pick up one of the slates for a rock bottom price as the HP TouchPad seems to be going for a rather reasonable $99 in some cases.

Obviously you can still get hold of the HP TouchPad if you don’t mind shelling out the original price with some retailers, but if you really want the HP TouchPad at a lower price is seems finding one has become a bit of an issue as many sellers are selling out rapidly.

The latest to place the HP TouchPad as out of stock is Target with the retailer out of stock on both the 16GB slate and the 32GB tablet, and both in black, so if you were thinking of hitting up Target it would appear for now you are right out of luck.

Personally I can’t really understand why there is now a rush to grab the HP TouchPad as HP is obviously not going to update the webOS slate at any point in the future and has also stated they will not license the operating system to anyone else so is basically dead.

Perhaps people are thinking Android will come to the HP TouchPad at some point in the future as we reported previously, which may make picking up the TouchPad a viably option, although it could be a considerable time before Android Gingerbread gets ported to the device.

However, for whatever reasons, people are snapping up the HP TouchPad like hot cakes, but if you haven’t already managed to grab one your search for the tablet is going to get a whole lot more frustrating as sellers run out of stock.

So if any of our readers have a tip where people can pick up a low priced HP TouchPad feel free to share your knowledge to our comments area below and maybe help out someone who is desperate to own one. 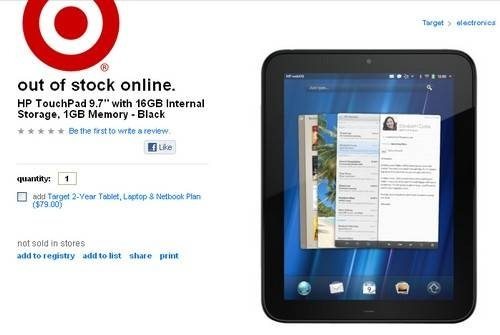 One thought on “HP TouchPad Tablet: Target Out of Stock”