Phones Review Quickie: If you are still hanging on over in the good old US of A for the LG Thrill 4G for AT&T to come out to play you’ll probably know that the Android 2.2 Froyo smartphone has seen its fair share of delay, a device that was originally expected early this month then late this month and now sometime September, and there’s even been word that the smartphone will see a name change to the LG Thrill 3D.

Whatever the device ends up being called, it appears the glasses free 3D handset will command a very sweet price once it eventually sees the light of day, as according to the guys over at the Android Community, Target is now advertising the LG Thrill 4G at a sweet attractive price of $79.99.

Unfortunately though as it is there’s still no real clue as to just when potential customers for the LG Thrill 4G or LG Thrill 3D whichever you wish to call it will actually get their hands on the Android handset, and to be honest before too long the device will probably be out of date if it doesn’t hit soon, it’s already hampered by coming with Froyo rather than Android 2.3 Gingerbread.

Furthermore neither LG or AT&T have let anyone know the reasons behind the continued delay to releasing the smartphone, which can be somewhat annoying to say the least, and obviously they run the risk of people simply moving on to another device if delayed much longer.

As it stands at the moment as far as I am aware, the LG Thrill 4G is expected to hit the shelves as of the 4th of next month, but it remains to be seen if the handset will actually materialise on that date. So are you still holding out for the LG Thrill 4G, is that $79.99 price tag just attractive enough to keep your interest, or have you already shifted to another smartphone? 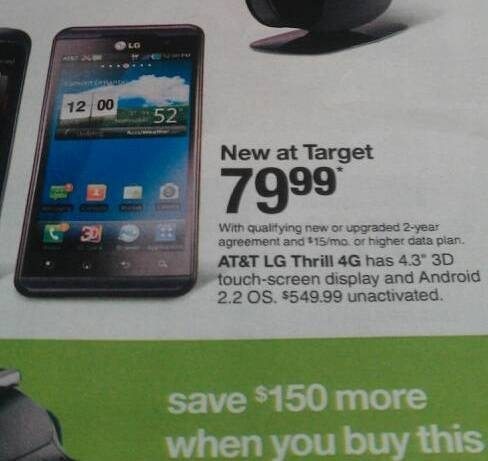