I’m sure by now most of the iPhone faithful have managed to stop crying over the departure of Steve Jobs as Apple CEO, it’s not like the iOS guru is really leaving Apple forever anyway and no doubt will still have a great deal of input on anything Apple, so perhaps its time for a little light-hearted take of the career of Steve Jobs.

Thus we have for your viewing pleasure below, a rather crazy animated video of Mr. Jobs career, a video that comes our way courtesy of the guys over at Phone Arena by way of the Tech Crunch guys and lasts just over two minutes.

The video originates from YouTube user NMAWorldEdition and takes a look at the career span of the Apple boss starting off with Steve as a Buddhist and dabbling in LSD, and then being hit on the bonce by an Apple logo, and giving birth to the Apple PC.

Of course we get to see Steve battle the evil Darth Gates to claim that Vader helmet as his own and become the lightsabre wielding Darth Jobs we have seen so many times before and change the world to everything Apple.

They also briefly cover Steve’s illness with Steve killing off the grim reaper, and there’s a great shot of the Apple Death Star as well, and then comes Steve’s battle with Android, something that Steve hasn’t yet managed to win and is still ongoing as the recent patent fights prove.

Whether Apple CEO Tim Cook will be able to fully defeat Android in times to come remains to be seen, but for now I’ll leave it there and let you head on down to check out this Steve Jobs career animation video, and feel free to let us know your thoughts on Steve Jobs resignation to our comments area below…enjoy. 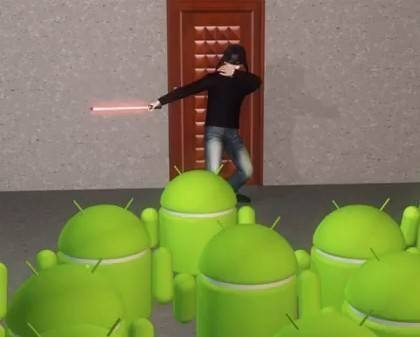