A day for videos it would seem. As you may be aware, Samsung has gone official with the US versions of the Samsung Galaxy S II, and the first of those variants to come out to play in the good old US of A will be the Sprint Galaxy S II, which is known as the Samsung Epic 4G Touch, and we have a little hands-on video footage with the device for your viewing consideration below.

The Samsung Epic 4G Touch Galaxy S II for Sprint hands-on footage comes our way courtesy of the guys over at Slash Gear who got their eager mitts on the Android smartphone while at the Samsung event in New York City and delivers just over four minutes of checking out the handset.

The Samsung Epic 4G Touch is the WiMAX version of the Android 2.3 Gingerbread handset along with carrier based apps and TouchWiz user interface and of course all the usual specifications associated with the Samsung Galaxy S II.

The guys do say that when handling the Samsung Epic 4G Touch has a “more round feeling” than the Samsung Galaxy S II variant for AT&T, but other than that the handsets are roughly the same.

The word is Sprint will release the Samsung Epic 4G Touch on the 16th of September and the device will command a price tag of $199 on contract, the AT&T Galaxy S II will follow and apparently T-Mobile will be the last carrier to push out the device.

So there you go, if you are contemplating picking up the Samsung Epic 4G Touch on the 16th of next month head on down and check out the hands-on footage to see if the Sprint version of the Samsung Galaxy S II is the one for you…enjoy. 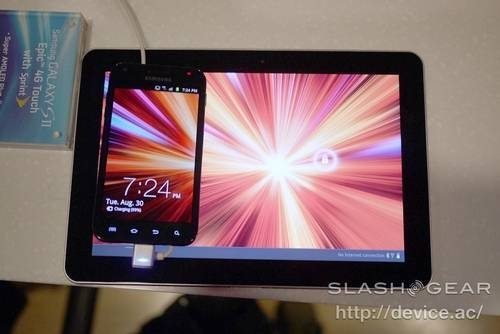