For those that may still be hanging on to pick up the Motorola Droid Bionic, as you probably know in just three days time you should be able to have your brand new Android smartphone in your hands, as the latest word is the Droid Bionic is hitting some Verizon stores in readiness for that long awaited released date.

According to the guys over at Phone Arena, launch kits including live demo handsets are arriving at some Big Red locations, whilst apparently some stores are already receiving their initial batch of the Motorola Droid Bionic but keeping them out of eyeshot before release day.

Furthermore there’s a new video of the Motorola Droid Bionic, which comes our way courtesy of YouTube user Bworley65 that lasts just over a minute and was uploaded via an Android phone and shows off the Droid Bionic packaging.

The Motorola Droid Bionic footage also confirmed that the much delayed smartphone will come out to play sporting Android 2.3.4 Gingerbread, unfortunately though the footage doesn’t include any commentary so you’ll just have to make do with the visual.

Although we now know just when the Droid Bionic will come out to play, albeit without any official announcement from Verizon nor have the Big Red slapped any pricing confirmation to the Android handset, or even put up any pre-order info, but it shouldn’t be too long before that official info becomes available.

Anyway, if you are still hanging in there to snap up the Motorola Droid Bionic and haven’t moved onto another smartphone due to the long delay, you can head on down and mash that play button to check out the Droid Bionic footage…enjoy. 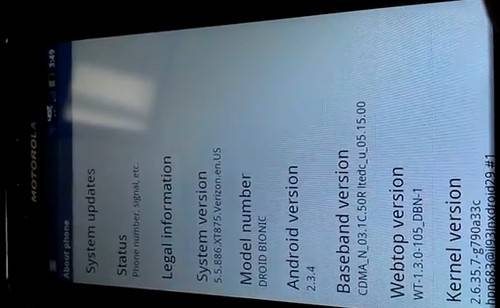