As most will be aware, the next generation iPhone is expected to be released by Apple some time next month, with some rumours saying an early October release, while other rumours predict a mid-October release of the iPhone 5, and now there appears to be a rumour that Best Buy could possibly be gearing up for an iPhone 5 launch on the 21st of October.

According to the guys over at This Is My Next, they received word that a Best Buy location will be holding an “Apple fixture” installed on October the 21st, which could suggest that date will be when Best Buy launches the iPhone 5.

Apparently this “Apple fixture” instillation isn’t a run-of-the-mill thing because the word is a Best Buy managers has to be there at six in the morning, which is unusual as most managers start at seven, also apparently a similar arrangement was used when the iPhone 4 was released.

However, although the doc doesn’t mention the iPhone 5,no doubt Best Buy employees are already aware of the iPhone 5 release, the “Apple fixture” could basically be something else other than the new iOS smartphone, so it could be totally wrong but it does seem somewhat of a coincidence that the instillation is scheduled for roughly the same time as some of the rumours.

However, apparently the unnamed tipster has also said that there is a meeting scheduled for Best Buy managers on the 10th of October, a meeting to discuss “upcoming BIG release dates,” and its not too far beyond the realms of reality to assume Best Buy managers would have forewarning of the upcoming release date for the iPhone 5 so they can chat about the handset at said meeting, which again would lend support to the release of the iPhone 5 possibly happening on the 21st of October.

Of course as with anything to do with Apple gear, this is all assumption based on what an anonymous tipster has stated, and thus should be treated like all other rumours until such times as Apple decided to let the whole word know. 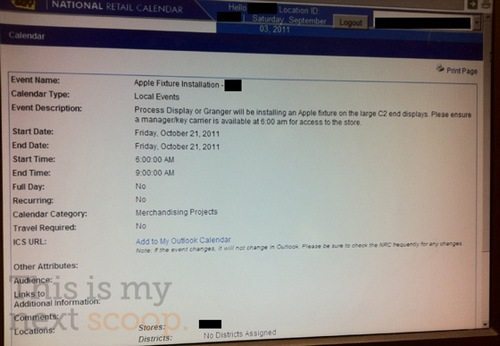