Yes folks, quicker than I can change my shirt we have yet more on the release of the next generation iPhone with Best Buy, earlier we posted a possibly launch date of October the 21st doing the rumours rounds, and now it appears that some more light has been shed on Best Buy iPhone 5 release with word on when the next iOS smartphone should be up for pre-order.

According to the guys over at the Boy Genius Report, they have come into possession of a leaked Best Buy document that states Best Buy and Best Buy Mobile anticipate offering the iPhone 5 for pre-order as of the first week in October.

Furthermore it is mentioned in the leaked document that the Sprint iPhone 5 will also be available on launch, however the documentation also makes it quite clear that “Apple product introduction and launch dates are subject to change.”

But wait, there’s more…in an update to their original post the guys say that their unnamed source has put a little clarification to the matter, and claims that its “actually possibly presales will be starting this week” and goes on to say that the iPhone 5 will arrive in the first week of next month.

Of course this conflicts with the earlier rumour that Best Buy may possibly launch the iPhone 5 on the 21st of October, but as with all these rumours they have to be taken with a large pinch of salt, but no doubt many would prefer this particular rumour to be true rather than the first one.

So who is hoping this rumour turns out to be spot on and that the iPhone 5 will indeed surface the first week of next month? 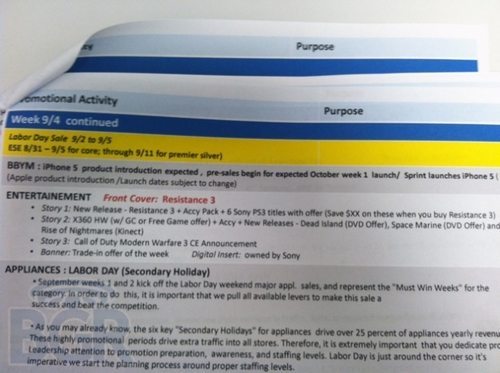