Looks like Angry Birds maker Rovio is looking to make even more cash from the hugely popular multi-platform franchise with pushing out the Angry Birds Speaker system that is compatible with the iPhone, iPod and Android smartphones and tablets for Europe and the United States.

According to the guys over at Engadget, the Angry Birds Speaker systems where on display at IFA 2011 in Berlin and are made by Gear4 and will apparently start shipping to the US and Europe in the next few weeks.

We have a video preview of the Angry Birds Speakers for your viewing consideration below courtesy of ITTV, which delivers a one and a half minute look at the Angry Birds speakers that includes a red bird with a 3.5mm jack and works with any Android device including any tablet.

Then there’s the helmet green pig, which is for the iPhone and iPod and features an auxiliary cable in the back so it can also work with other mobile devices, and can also charge your iPhone or iPod and even comes with a remote control.

There’s also a black Angry Bird as well and all are due a global launch at the end of this month with the non-dock version expected to carry a price tag of roughly 69 Euros, but no work on pricing for the others at this time.

So there you go, all you Angry Bird fans that simply love owning Angry Bird merchandise can soon add another item to your collection, until then head on down and mash that play button to check out these Angry Birds speakers…will you be picking up one as soon as they become available? 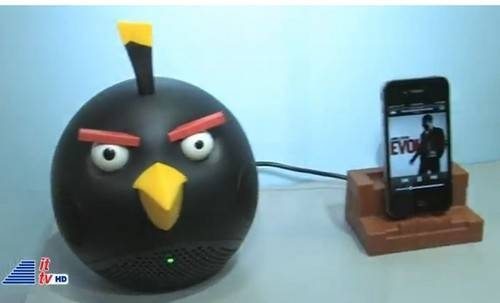