Galaxy S II In While Now Available From Vodafone

According to the guys over at Engadget, Vodafone UK has now made the Android 2.3 Gingerbread Galaxy S II sporting a white coat available to purchase from their website and is available as a free handset on pay monthly plans from 36 quid on a two-year agreement.

Obviously the white Samsung Galaxy S II only offered a colour change and all specifications and features remain as the black Samsung Galaxy S II, which include a 4.3-inch Super AMOLED Plus touch screen, 1.2 GHz dual core processor, 8 megapixel auto-focus camera with LED flash, 2 megapixel front facing snapper, 1080p video and so on.

However if you opt to get the Android smartphone in white on the cost of Â£56 per month you can still have the handset for free and get 3000 minutes, unlimited texts and 1GB of data. 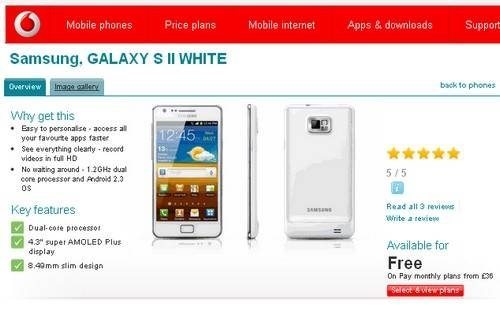