Phones Review Quickie: Well now it seems another smartphone maker is getting in on the so called “Facebook phone” game, we’ve already seen a couple of “Facebook phones” with the HTC Status and the HTC ChaCha, and now the word is Motorola is to launch a device with a dedicated Facebook button.

According to an article over on Unwired View, by way of Bluetooth SIG, the new smartphone is called the Motorola EX225 and along with a dedicated Facebook button the smartphone will pack a 2.4-inch landscape display.

Other specs with the Motorola XE225 are a full QWERTY keyboard below that display; full Facebook integration in the user interface, and apparently the Motorola EX225 is not an Android device as there are no Android buttons evident so will probably run Brew.

Furthermore there is apparently another version of the smartphone that is called the Motorola EX 226 although that particular model doesn’t have the Facebook button but is said to feature dual SIM slots.

Other than that there’s no other details on either the Motorola EX225 or EX226, and obviously no insight into just when and where the smartphone will come out to play, but we’ll of course keep you posted as and when we learn more.

So does the possibility of yet another “Facebook phone” this time from Motorola, actually excite anyone out there in the mobile space, is sporting a dedicated Facebook button a winner in your eyes or can you do without having that button on your device? Fell free to let us know your opinions by dropping us a line below. 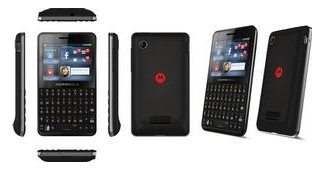