Apple In Yet Another Patent Infringement Fight

According to the guys over at Apple Insider, by way of Patently Apple, Droplets filed their complain in the US district court of Eastern Texas, a district apparently known for “rapid resolution in favor of rights holders in infringement cases.”

The patent that is claimed to be infringed is Patent No 6,687,745, and is for “System and method for delivering a graphical user interface of remote applications over a thin bandwidth connection.”

According to Patently Apple, the complaint accuses Apple “of violating their patent that covers an object-oriented approach for delivering interactive links to applications and information stored on a network. The Complaint claims that Apple’s own website along with their movie trailer site, iTunes and “other web applications” violate their patent. Other defendants in the case include Google, Facebook and Yahoo.”

However, just what Droplets is looking for in the way of damages and such from Apple is at this time unclear, but obviously they will be looking for some monitory recompense along with licensing fees if it is found that Apple does infringe on said patent.

No doubt as with most of the patent infringement lawsuits there is a long, long way to go before a final decision is made, and obviously Apple will undoubtedly put their army of lawyers to work on fighting the claim, so we’ll keep you posted on this one as and when we hear more. 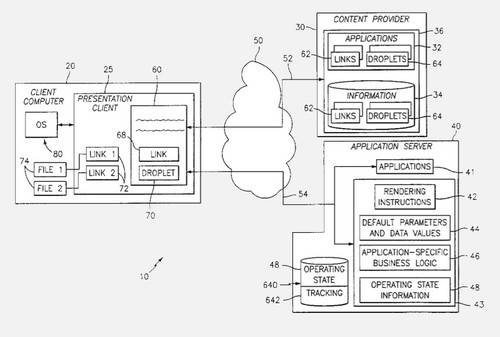