Another Android Samsung Galaxy smartphone is making its way to Vodafone UK in the not too distant future in the form of the Samsung Galaxy Y handset, an entry level Android device with that “Y” standing for “young minded” as per Samsung new naming game.

According to the guys over at Pocket Now by way of Cool Smartphone, Vodafone UK now listed the Samsung Galaxy Y smartphone on their coming soon page where potential customers can register for update as to the availability of the device.

With the new Samsung naming game, along with the Galaxy Y Samsung also launched the Samsung Galaxy W, Samsung Galaxy Y Pro and Samsung Galaxy M Pro, and if you still haven’t got your brain round the meanings of the new names they go like this…

“S” is for Super Smart and for Samsung flagship devices such as the Samsung Galaxy S — “R” is for Royal/Refined and for premium category devices — “W” is for Wonder for high-quality strategic models — “M” stands for Magical for high-performance devices with an economic price point, and “Y” stand for Young, meaning entry level handsets or strategic models for emerging markets, while the “Pro” attachment means the device features a QWERTY keyboard.

Of course, if you are one of the “young minded” and fancy picking up the Samsung Galaxy Y there is of course no word on just when the Android smartphone is likely to release on Vodafone or just what price the handset will command, but we will keep you informed as and when we hear. 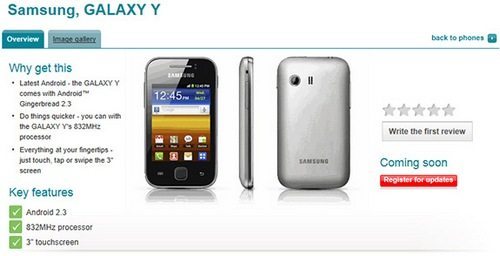