The expected release of the much awaited next generation iPhone draws even closer and anything to do with the iPhone 5 is big news the closer that launch gets, and it appears that Vodafone may either know more than some or have jumped the gun with the iPhone 5 as they have given a little hint on the Apple device.

According to the guys over at Apple Insider, Vodafone UK has put up a product page for the Vodafone Sure Signal, a signal booster and the page also offers a list of compatible smartphones and lists the iPhone 5.

The guys say that it could of course just be a typo, or that Vodafone is presuming the iPhone 5 will come out to play in both colours and both capacities, or perhaps they have had forewarning from Apple that this will be the case.

However, there isn’t any mention of the rumoured 64GB iPhone 5, so if this Vodafone info is spot on it would appear that there may not be a 64GB iPhone 5 on the cards.

Thus if Vodafone UK is spot on with its information, the iOS faithful can look forward to a 16GB and 32GB iPhone 5 in black and white but not in 64GB, would this disappoint the iOS faithful? 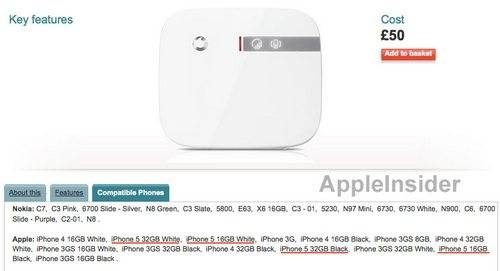