Well who would have guessed that the next generation iPhone would be in great demand like the iPhone 4 before it, it seems somewhat obvious to me that demand for the iPhone 5 is going to be huge as any Apple gear is always in big demand, but apparently a recent survey now confirms this.

According to the guys over at Apple Insider, a new survey by RBC/ChangeWave that took in 2200 participants between August the 2dn and August the 10th shows that “pre-launch demand for the iPhone 5 exceeds that of the iPhone 4.”

Furthermore it appears that people want the iPhone 5 on both T-Mobile and Sprint with in excess of 50% of subscribers saying that they would be somewhat likely or significantly likely to purchase the next iPhone if it was available.

Apparently the survey also took in the Apple iPad and as a result showed that 85% of tablet buyers plan on purchasing an iOS tablet showing Apple’s dominance in the tablet space.

Due to the survey indicating that demand for the iPhone 5 is going to be high, analyst Mike Abramsky raised his estimate for 2012 iPhone sales from 105 million up to 110 million, and believes that Apple is likely to sell 27 million iPhone handsets in Q1 of 2012.

To be quite honest, it isn’t really surprising that the iPhone 5 may see greater demand considering the vast amount of iOS faithful out there and all the hype that has been attached to the upcoming smartphone, as I’m sure everyone knows it is bound to be a huge success for Apple and we don’t really require a survey to know this. 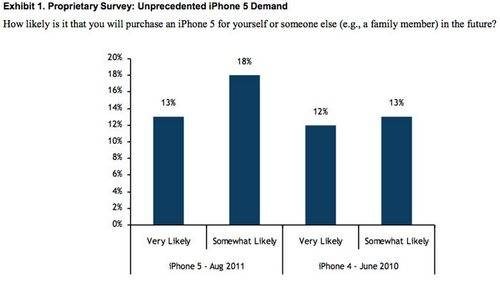