Phones Review Quickie: For those that are thinking of snapping up a Windows Phone Mango smartphone in the United Kingdom, you just might like to know if your favourite carrier is Orange, that the carrier will be offering the HTC Radar at some point in the not too distant future as the device has now hit their coming soon page.

According to the guys over at Softpedia, Orange UK has now put the HTC Radar on their coming soon page although of course there is no mention as to exactly when you will be bale to grab the new Windows Phone handset.

According to the Orange UK coming soon page, the HTC Radar is “crafted from premium materials and is literally brimming with features.”

At this time it is unclear what the HTC Radar will hit your pocket for on Orange, but the coming soon page does suggest that there is a possibility the handset will be free on pay monthly as well as a pay as you go version.

So are any of our Brit readers considering picking up the Windows Phone Mango touting HTC Radar from Orange once the device sees release? 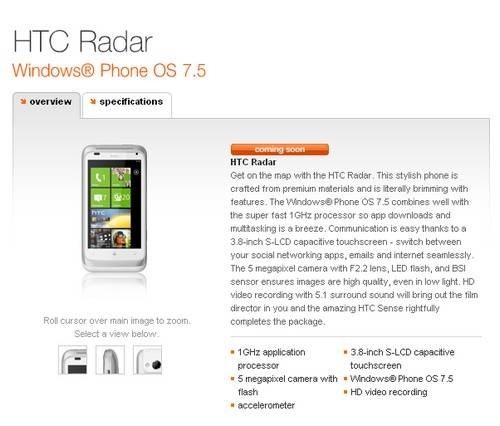