Phones Review Quickie: LG has now added a new Android smartphone to their Optimus range and have unveiled the LG Optimus Q2, a QWERTY slider smartphone that sports a 4-inch WVGA touch screen and will be available to purchase in South Korea as of next weekend.

According to the guys over on Android Community, the LG Optimus Q2 sports a 1.2GHz dual core processor with a display that runs 700 nits and packing a 5 megapixel camera along with a front facing snapper Bluetooth and WiFi Direct support.

Apparently the LG Optimus Q2 measures just 12.3mm in thickness while weighing 147 grams and LG has managed to get the device 2mm slimmer than most other slide out QWERTY keyboard handsets in their range.

Other than those aforementioned specifications though no other details are available, so it isn’t too clear at this time just what Android operating system the LG Optimus Q2 is running but best guess would be Android Gingerbread, however the guys do say LG has done “some fiddling with its own UI system.”

Also there’s no word on just how much the LG Optimus Q2 will set one back or whether the Android smartphone will actually see the light of day outside South Korea, but as soon as we hear more we will of course pass it along.

So does the Android toting LG Optimus Q2 with its sliding QWERTY keyboard capture the attention of any of our readers? 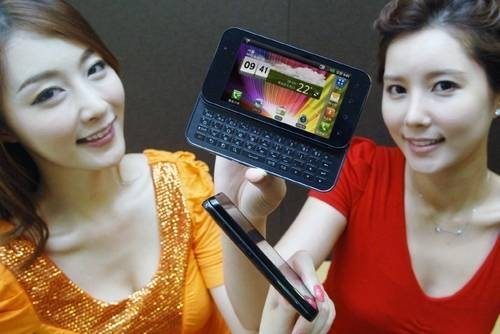