It appears that with a little modification there’s nothing an Android device can’t play along with, as we know Android is already being ported to the now defunct HP TouchPad, but how about having the ability to play a few Wii games on your Android slate?

According to an article over on Nexus404, it appears some clever clogs modder has managed to get Wii games running on an Android 3.2 Honeycomb tablet, and we have video proof for your viewing consideration below.

The Wii on Android Tablet video comes our way courtesy of YouTube user Obiwan222222, and delivers twoand a half minutes of checking out playing Wii game Super Mario Galaxy 2 on the Asus EeePad Transformer.

The modder used the Dolphin Wii Emulator to run the Wii, while using the Android app Splashtop Remote Desktop to connect to the PC running the Emulator, connected an XBox 360 wireless controller to the Asus Eee Pad Transformer keyboard dock and Bob’s your uncle you’re off and running Wii games on the Android slate.

Have to say it looks pretty cool to me, and doesn’t seem all that hard to achieve, although the guy says it’s a proof of concept showing what can be done, and there’s no reason why you can’t run any game you like on any mobile device.

So if you fancy trying out running Wii games on your Android tablet head on down and check out the video footage, and if you do give it a go feel free to let us know just how you get on…enjoy. 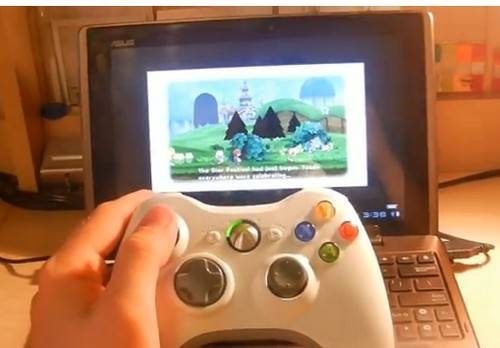