Although when using a tablet most come with on screen keyboard many out there in the mobile space do still have a hankering for the more traditional physical keyboard, and for those that own an iOS tablet there is an accessory from Logitech called the fold-up keyboard for iPad that does delivers that physical keyboard to the Apple slate.

And today we have a little hands-on video with the Logitech Fold-up keyboard for iPad for your viewing consideration below, which comes our way courtesy of the guys over at Slash Gear and delivers a quick look at the folding action of this iPad keyboard.

Once the user has finished using the fold-up keyboard, which is connected to the tablet via Bluetooth, it simply splits and slides back behind the slate and shuts down to conserve battery power, and the keyboard battery is charged via USB.

Furthermore the Logitech fold-up keyboard attachment for the iPad still allows the user to use the Apple Smart Cover if they have one, and according to the guys delivers a “lovely easy typing experience.”

I have to say, that scissor action with the keyboard does look rather slick and neat, and for those wishing to own the Logitech fold-up keyboard for the iPad, the accessory can be purchased direct from the Logitech website as a cost of $129.99.

So there you go, all you need do now is head on down and mash that play button to check out the Logitech Fold-up keyboard for the iPad and see what you think…enjoy. 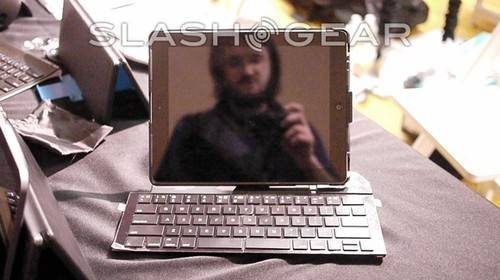