iPhone Controlled Car Drives You Up The Wall: Video

You probably know that with an iOS app the iPhone can accomplish quite a lot of things, such as remote controlling real vehicles, and model helicopters, and cars, we’ve all see videos of the iPhone doing such things, but how about using the iPhone to control a model car driving up walls?

Well that’s what we have for your consideration below, a video of the iPhone controlling a model car that can climb walls. The video footage comes our way courtesy of the guys over at Ubergizmo and by way of iHelicopters, who have now launched the iPhone Controlled Wall Climbing Car iW500.

So how does this wall climbing iPhone controlled car work? Well apparently the iW500 forms a vacuum on the surface it is running on enabling the user to run the car up walls, as well as across ceilings as long as it’s a smooth flat surface, and requires the iSpace iOS app which is a free download from iTunes.

The iSpace app communicates with the iW500 car through a plug-in transmitter, and the user controls the motions by onscreen controls and by the iPhone gyroscope. The iW500 has working headlights and rear lights for when play in the dark, and after a 30 minute charge can play along for between 8 and 10 minutes before requiring charging.

The iW500 measures 15 x 8 x 4.5cms and weighs in at 380 grams, and is apparently compatible with all iPhone handsets, the Apple iPad and iPod Touch, and is available to purchase from the iHelicopters website for $60.

So if you are into this remote control lark with your iOS device and fancy a car that can climb walls, head on down and mash that play button to check out a quick unboxing and demo of the iW500 in action…enjoy. 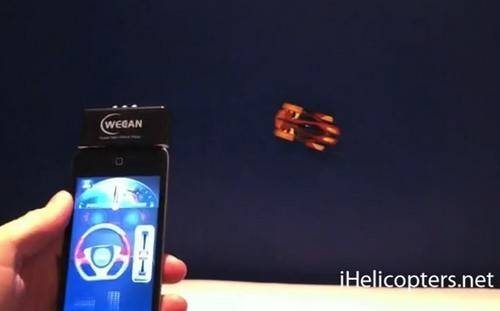