Phones review Quickie: Samsung’s latest addition to their Galaxy range, the Samsung Galaxy W was supposed to become available to purchase as of yesterday but for some strange reason that didn’t happen, the Android smartphone is due in the UK sometime this month though.

According to an article over on Unwired View, both O2 UK and 3UK will be offering the Samsung Galaxy W, and the handset will also be available as an unlocked device from both Expansys and Amazon UK, and we have the pricing for the unlocked version.

Currently neither Expansys nor Amazon UK have the device in stock, with Expansys saying the handset should release as of yesterday the 21st while Amazon UK say is will be available as of the 28th of this month.

So as for that unlocked SIM free price for the Android 2.3 Gingerbread smartphone, Expansys are asking Â£284.99 whilst Amazon UK wants to hit your pocket for a tad more and asks Â£299.99, and although not in stock or available you can of course pre-order.

No word on just why Samsung didn’t deliver the Samsung Galaxy W for release yesterday, but no doubt the Android handset will come out to play in the UK soon, so any of our readers interested in snapping up this Galaxy handset? 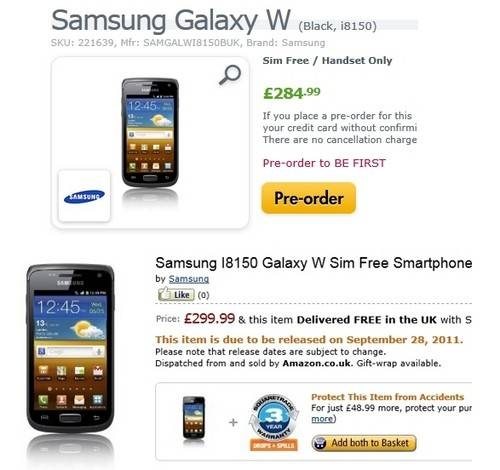