When it comes to mobile phone loyalty, are you loyal to say Android or Apple? This is a question that pops up all the time, and many customers do have loyalty so we will give you a few details then ask you a poll question at the end.

According to the latest survey carried out by UBS Investment Research, Apple customers are the most loyal with 89 percent of customers sticking with Apple. HTC came in at 39 percent loyalty, RIMM at 33%, Samsung 28%, Motorola 25% and Nokia at only 24%. 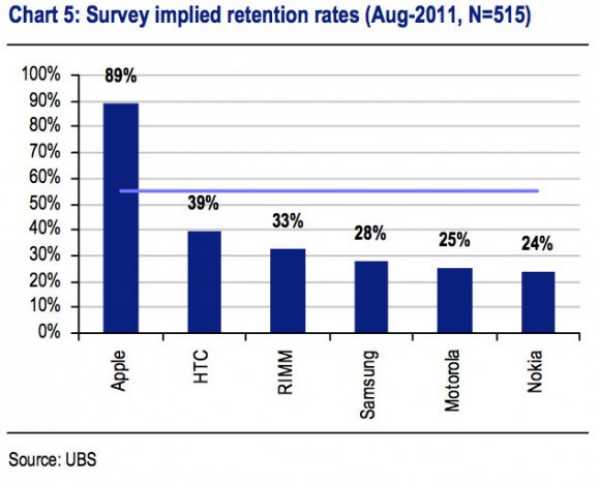 Does this mean that a few Android users will leave in favour of the iPhone 4S or iPhone 5? Apple Insider Says, “In fact, when looking solely at consumers who plan to switch smartphone makers, Apple is a huge net beneficiary. More than 50 percent of those looking to switch plan to buy an iPhone, while just 10 percent of switchers plan to ditch the iPhone.”

The iPhone 5 and possibly the iPhone 4S is expected to be announced at WWDC 2011 October 4, this is one of the most hyped smartphones on web that no one knows anything about. We can suggest specs, release dates etc but unless Apple speaks up it will all remain on the rumour mill for now.

We here at Phones Review would like to know our readers a little more, it is ok doing these surveys but we would like to conduct the same with you.

Below we have started a poll with a question and all you need to do is click the relevant answer field. Please click only one, if you have anything you wish to say on the above please do use the commenting area provided below.