Okay call me an Android fanboy but I’ll start off by saying it for the iOS faithful, Apple has only one phone, the iPhone, whilst Android has many, now with that traditional Apple fanboy argument out of the way we can get down to the business of letting you know that Android is still the preferred platform over iOS in the good old US of A according to the latest figures.

According to an article over on Android Community, number collectors Nielsen have gathered up the latest figures for the US wireless mobile market for the past 3 months and shows that Android is still dominating the States and not Apple’s favoured operating system.

According to those figures, of the smartphone purchasers in the last 3 months, a sweet 56 percent of those are now part of the Android faithful, whereas iOS only managed to maintain 28 percent putting the iPhone maker in second place behind Android, somewhere they should be used to by now.

Thus sit would seem that Android is preferred over the iOS platform when it comes to smartphones in the USA as in anyone’s books 56 percent is double the uptake of people picking up the iPhone, although of course those figures could well change soon when Apple finally launches the iPhone 5 or iPhone 4S or whatever they decide to launch at their October 4th event.

Obviously the smartphone market is also making big increases overall as according to the figures 56 percent of users who purchase a new device in the last 3 months opted for a smartphone rather than a feature phone.

Of course these figure will not matter in the slightest to Apple and its loyal band of followers, but it does go to show that Android is doing quite nicely despite Apple attempts to have several Android based device banned for being sold. 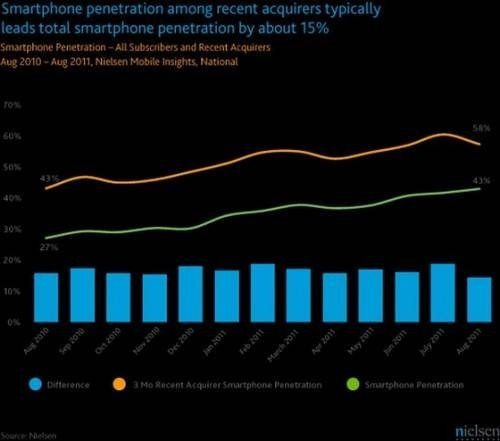