Phones Review Quickie: Well I must say it’s been quite a while since the mobile arena has seen anything from this source of smartphone information, the guy who has quite a rep for getting things on target when it comes to smartphone rumours, Eldar Murtazin.

According to the guys over at Ubergizmo, the editor in chief of Mobile-Review shot of a little bit of info via his Twitter account a few hours ago that says Apple has reworked the design of the iPhone 5, and Samsung has done the same with the Samsung Galaxy S3.

Although Murtazin doesn’t say when Apple reworked the iPhone 5 design, if they have done so recently it means quite a few of those supposed iPhone 5 cases we’ve all seen leaked to the net wave previously could be off the mark, possibly leading to some trouble for those iPhone 5 case makers, but then that’s the risk you take when jumping the gun.

Murtazin doesn’t mention just what the reworked iPhone 5 design looks like, so he could simply be guessing, and he doesn’t say how the Samsung Galaxy S3 has been reworked either, but he does claim that this is the reason the Android smartphone launch has been postponed until February 2012.

Having said that, as the Samsung Galaxy S II hasn’t been out all that long and only just hitting the States, one wouldn’t expect old Sammy to launch the third generation Galaxy smartphone so soon anyway. 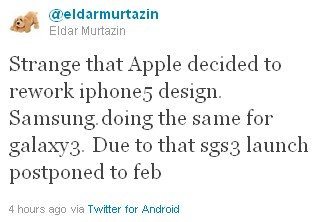