For those in the United Kingdom who may have been waiting patiently to get their hands on the Sony Ericsson Xperia Pro smartphone, you’ll know that the Android device has been somewhat delayed and was expected late this month; however, we new have a little release date info on the device for you.

According to an article over on Pocket Now the guys over at the Clove are saying they expect the Sony Ericsson Xperia Pro to be available as of the 6th of October, so that’s Thursday of next week. See it’s not all about the iPhone 5 in the mobile world is it.

If you are after the Android 2.3 Gingerbread smartphone, the Clove is offering the device unlocked with a price tag of Â£322.80 inclusive of VAT, which is roughly $500.

Unfortunately though as Sony Ericsson has for whatever reason delayed the release of the Xperia Pro in the UK, what would have been a fairly reasonable handset back when it was first due is now probably outgunned by recently released newer Android handsets.

So with this in mind, are any of our UK readers still holding out to snap up the Sony Ericsson Xperia Pro or have you decided to move on to another Android smartphone? 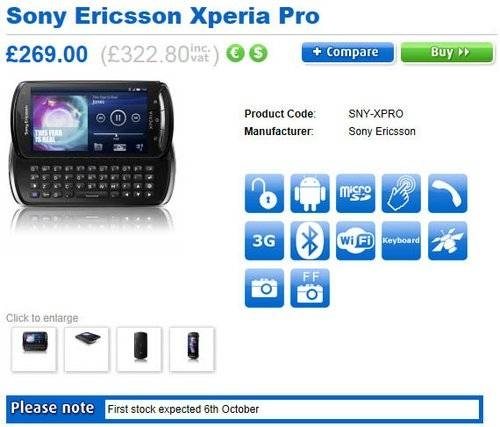 One thought on “Xperia Pro UK Release Date Next Week”