Phones Review Quickie: It’s been some time since Verizon said the Motorola Xoom tablet would get upgraded to 4G LTE, but the Big Red has finally come good on their promise and has now made the 4G LTE upgrade available to owners of the Android Honeycomb slate.

According to the guys over at Unwired View, Verzion has now gone live with the 4G LTE Xoom upgrade, a hardware upgrade that was originally promised to happen 90 days after the release of the Honeycomb Xoom, but never materialised.

However, as of right now Motorola Xoom owners can send in their Android tablet to gain that all-important 4G LTE upgrade, which should apparently take in the region of 6 business days, and although would seem quite a lot of time, you do receive more functionality for free.

Furthermore as of October the 13th, the Big Red will also start offering the Motorola Xoom tablet with built in 4G LTE radios, and those 4G LTE enabled slates will command a price tag of 500 bucks when signing on for the usual two-year term.

According to the guys there are three plans available, 2GB a month costing $30, 5GB at a cost of $50 or for $80 per month you get 10GB. For those that wish to take advantage of the upgrade to 4G LTE, full instructions on just how to do so can be found by hitting up HERE.

Will you be sending in your Motorola Xoom for upgrading to 4G LTE can you do without your slate for those six days? 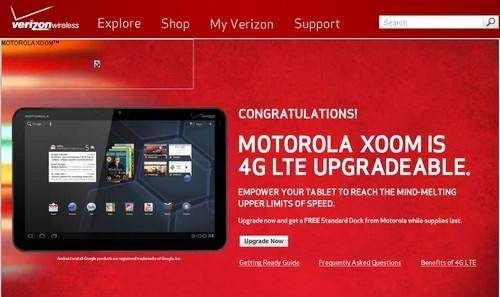