Phones Review Quickie: There have in the past been numerous rumours that Research In Motion would deliver their popular BlackBerry Messenger to the Android platform, and it appears that those rumours have borne true as BlackBerry Messenger for Android has now been pictured.

According to an article over on Phone Arena the guys over at T3 have received a few images of the BlackBerry Messenger for Android from an “anonymous tipster” that apparently show a beta version of the RIM service in the “final stages of testing,” and running on an “unspecified version” of the Android operating system.

According to T3’s internal source, BlackBerry Messenger in on its way to rival handsets with BlackBerry for Android and “it should be out by 2012.”

In said images obviously whatever device they have BlackBerry Messenger for Android being tested on appears to have one ridiculously scratched display, but the word is the BlackBerry service is expected to deliver the same functionality on Android as it does with BlackBerry smartphones.

BlackBerry Messenger for Android is also said to “work quite well with Android push notification,” and of course will be available to Android for free, which can’t be bad.

Other than that, that’s about all that’s known for the moment, with the “anonymous tipster” saying, I’m afraid there isn’t really much more I can tell you.” So for now we know that BlackBerry Messenger appears to be definitely making its way to Android.

So will any of our Android handset users be making good use of BlackBerry Messenger once the app come out to play? 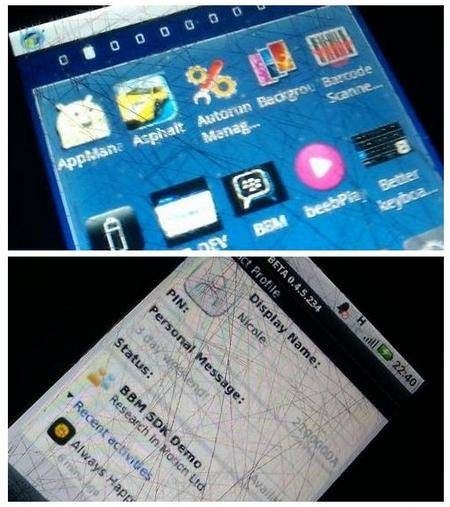