According to an article over on Ubergizmo, the guys over at Droid-life have managed to get hold of a couple of screens that show off the Samsung Stratosphere specs in all their glory along with comparing them to other smartphones on Verizon.

So here’s the low down on what you can expect with the Samsung Stratosphere, some of which we already knew of course, a slide out QWERTY keyboard, a 4-inch SUPER AMOLED WVGA touch screen, 1GHz single core processor, 512MB RAM, 5 megapixel rear facing camera with LED flash, 1.3 megapixel front facing camera, 4G LTE connectivity, 4GB internal memory and microSD expansion, and the Android 2.3 Gingerbread operating system

Furthermore, the Big Red will also throw in a 4GB SD card in the box, and the Stratosphere will of course be the first 4G LTE enabled smartphone on the Verizon network.
The screens also compare the specifications of the Samsung Stratosphere with these devices, the LG Revolution, the Samsung Droid Charge, the HTC Thunderbolt, HTC EVO Shift 4G, the Samsung Epic 4G and the Sidekick 4G.

According to the Droid-life guys the Big Red has the Samsung Stratosphere as a mid tier handset, so they hope it will mean the Android 4G LTE device will have a price tag of around the $150 mark.

So with all that said, are any of our readers over in the good old US of A hoping to snap up the Samsung Stratosphere once Verizon pushes it out the door? 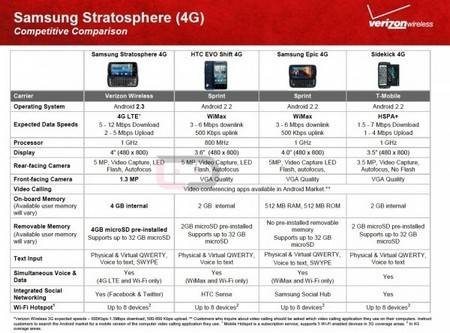 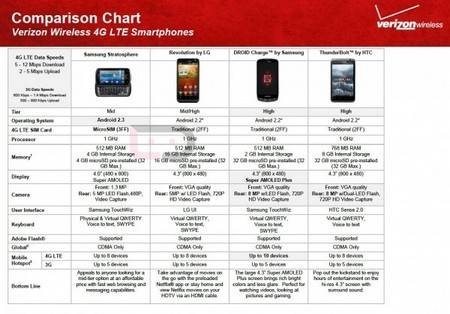