The Apple event that everyone’s waiting for will soon be upon us, but will Apple unveil the iPhone 5? Well it’s a bit difficult to say as Apple always keeps things under wraps until the actual event and never confirmed anything ahead of schedule, but it looks like the iPhone 4S may be the handset Apple unveils so we may not get the iPhone 5 just yet.

Most rumours doing the round have the iPhone 4S showing up and according to the guys over at 9to5 Mac another iPhone 4S reference has now been spotted by German website iPhone Ticker, who have managed to get hold of a screenshot of Vodafone Germany’s online store which shows the iPhone 4S in three capacities along with an 8GB iPhone 4.

NO mention of any iPhone 5 handset though, which could lead on to think that perhaps Apple is going to let down their loyal following by not unveiling the iPhone 5 as many expect.

Of course if Apple does indeed unveil the much talked about iPhone 5 along with the iPhone 4S and apparently an 8GB iPhone 4 then all these carriers need do is add the iPhone 5 to their inventory, so it is still possible we will see the iPhone 5 announcement come on the 4th…tomorrow.

Personally my view for what its worth is Apple will unveil the iPhone 4S only, but hopefully Apple will come good on the redesigned iPhone 5 tomorrow otherwise I’m not too sure just how well the iOS faithful will take the news as many are waiting to grab the next generation handset. 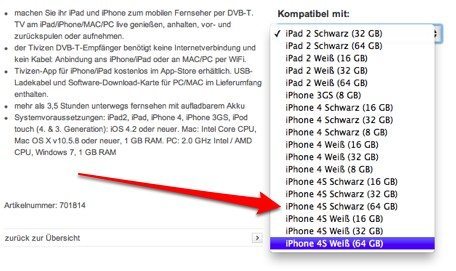