For the Android faithful that uses Hotmail you might just like to know that Microsoft has now officially made the Hotmail app for Android available to download from the Android Market, that enables easy access to Hotmail from your Android device.

Hotmail for Android features push email, syncs calendar and contacts, supports multiple Hotmail accounts, the ability to send and receive attachments, view folders in Hotmail including subfolders, and the ability to send images from your Android smartphone using Hotmail.

Since going live on the Android Market the Hotmail for Android app has received a multitude of user reviews with 215 of the reviews giving the application a 5 star rating whilst 41 give the app a 1 star rating.

One user rated the app 1 star saying, “No way its 6MB in size, installed it & phone memory is wiped by this app of over 10MB in size. So was uninstalled straight away, gonna stick with Better Hotmail which so far is best around.”

Another user rates the app 5 star saying, “Finally! And worth the wait indeed. This is the official MS Hotmail app with true push and its fantastic.”

While a 4 star rate from a user claims, “I will mark 5 star after they make it possible to move to memory card or at least make the size smaller. 10mb for a email client is too much.”

I figure if you really need to use Hotmail on your Android device then it would appear the general consensus is the Hotmail app for Android is good but has a few flaws so could be better, but that will probably come once Microsoft updates the app further down the line.

So for those that wish to download the Hotmail app for Android you can do so for free by hitting up the Android Market, and feel free to let us know how you get on. 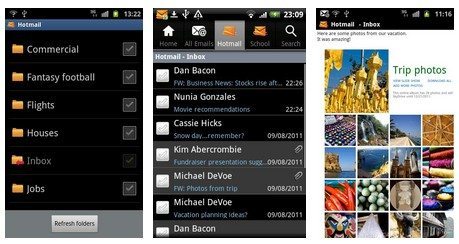