iPhone 5 iDSLR About As Real As A Sprint iOS Exclusive? Video

Apparently there is a rumour doing the rounds that Sprint has made a deal with Apple that will give them exclusivity over the iPhone 5, a deal that apparently will cost Sprint 20 billion bucks, something I personally think has much chance of being true as the iPhone 5 iDSLR in the video we have for your viewing pleasure below.

The iPhone 5 iDSLR video comes our way courtesy of the guys over at Slash Gear and by way of YouTube user Jeremiahjw, and shows off the supposed iPhone 5 with SDLR camera attached, and obviously something that’s never going to happen.

The iPhone 5 iDSLR is of course a fake product poking fun at Apple and their iPhone 5 with the supposed “senior vice president of design” Jony Ive, letting everyone know about the iDSLR photographic qualities whilst still being able to use the iPhone for texting, twittering, talking with friends and such.

There’s a bit of speculation going on, on Google+ this morning that Sprint may have gained exclusivity over the iPhone 5, but can you honestly see Apple giving exclusivity over the next generation iPhone to Sprint after only recently opening up the iPhone to other US carriers? Sprint will probably gain the iPhone but it is doubtful they will have exclusive hold over the device unless it’s over the cheaper iPhone that they will offer their pay as you go customers.

Anyway back to that video, which they claim along with all the functions of the iPhone 5 the user can snap high quality professional photos. Obviously one would require a briefcase to carry the iPhone 5 iDSLR around so doesn’t really make it that much of a portable device, but I figure its just a bit of fun anyway as are most of these videos.

Anyway head on down and mash that play button to check out the obviously fake iPhone 5 iDSLR, and feel free to let us know if you think Apple has agreed to give Sprint exclusivity over the iPhone 5 by posting to our comments area below…enjoy. 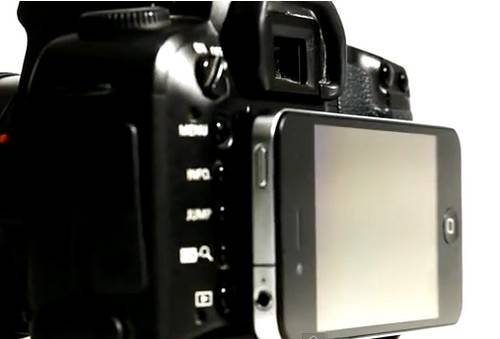