Motorola is about to launch a new product aka the Motorola Spyder LTE smartphone (or possibly the Droid Razr), it is apparently faster than a jet and faster than the Bugatti Veyron according to the YouTube video embed below this article, do not believe us go and watch it.

Keep Tuesday October 18th, 2011 free, Motorola is launching a brand new product with a time at 12pm. This is going to big, this event joins both Motorola and Verizon Wireless together at this special launch, Engadget have done a little digging and can confirm that the new product is the LTE-packing Motorola Spyder (The name could change to the Droid Razr), no one is sure about this as of yet.

The Motorola Spyder main features include a 4.3-inch 960 x 540 qHD Super AMOLED display, which is the first of its kind.

Engadget knows it is new handsets because when they opened their Motorola invite in their browser, they saved the image to their desktop, once this was dome they noticed Moto’s own PR team had labeled the photo, “spyderlaunchinvite.”

Watch the video below, it looks like something big is coming, this new event could be launching just the one device, or they could be releasing a whole new Droid family to the list, lets hope so.

We will be covering all the news on this Motorola / Verizon Wireless event on October 18th, be sure to be with us as this could be magical.

What product do you think will be announced at the event, that will be faster than a jet, faster than a Bugatti Veyron, thinner and is also lighter? 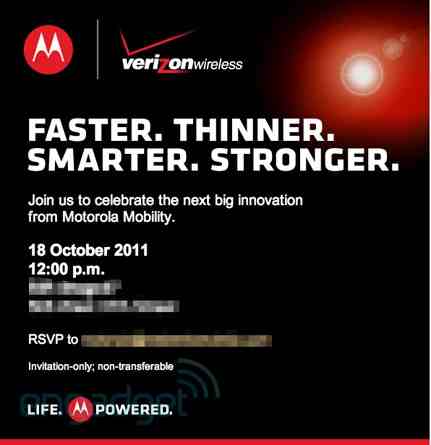