The Samsung Nexus Prime or Galaxy Nexus as some call it hasn’t yet been officially announced due to Samsung and Google postponing the debut of the first smartphone to surface with Android Ice Cream Sandwich, but that hasn’t stopped one retailer in Singapore listing the device as coming soon.

According to the guys over at Phone Arena, Singapore based retailerSGBEST have now placed the Samsung Nexus Prime on their online store as coming soon along with a few photos, however said photos seem to have been taken from previously rumoured sightings of the Android handset.

The guys say one seems to a crop from the Samsung teaser while another is from the hands-on video of the Nexus Prime, so the guys presume that the site is possibly just trying to gain some attention on the back of all the Nexus Prime hype, and obviously there’s no pricing on the device.

The site also list specs for the Nexus Prime but unsurprisingly when I check the site those specs are now blank at this time presumably due to the specifications for the device having yet to be official revealed.

Thus far the rumoured specs for the Samsung Nexus Prime are a 4.65-inch touch screen, Android 4.0 operating system aka ICS, TI OMAP dual core processor although there is a rumour it may pack a 1.5 GHz Samsung Exynos processor, an 8 megapixel rear facing camera along with a 2 megapixel front facing camera, NFC, and 4G LTE connectivity.

There’s also a rumour that the Samsung Nexus Prime will be announced shortly with an announcement date of the 27th of this month with a release date of the 3rd of November as we have previously reported, whether this will turn out to be true remains to be seen. 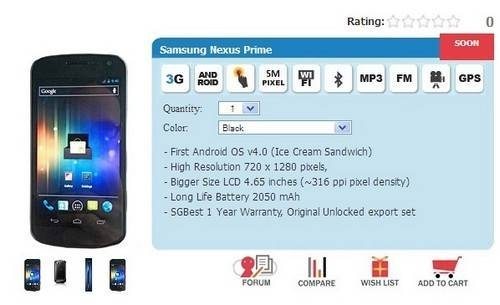 5 thoughts on “Nexus Prime Listed As Coming Soon In Singapore”