Now that Samsung and Google have gone all official with the Samsung Galaxy Nexus, which will release in November to the Android masses and take on Apple’s latest top seller the iPhone 4S, unless of course Apple attempts to hold up the release by getting the device banned as it’s from Samsung, what you need is a little hands-on footage time with the Ice Cream Sandwich handset right?

So that’s what we have for your viewing consideration below, a hands-on video with the Samsung Galaxy Nexus courtesy of the guys over at Slash Gear who were on hand at the Hong Kong event to grab some playtime with the cool liking new flagship handset.

The Samsung Galaxy Nexus is just 8.94mm thick and features a contour design along with that 4.65-inch Super AMOLED HD touch screen, of which the guys say is “incredibly bright, colour rich and vivid,” whilst the Galaxy Nexus feels solid and slick in the hand.

They also say that Android Ice Cream Sandwich is “extremely smooth and fast” and will get into more detail on Android 4.0 at a later date.

That’s your lot, all you need do now is head on down and hit that play button to check out the Samsung Galaxy Nexus getting the hands-on treatment; are you anticipating picking up the Galaxy Nexus in November? 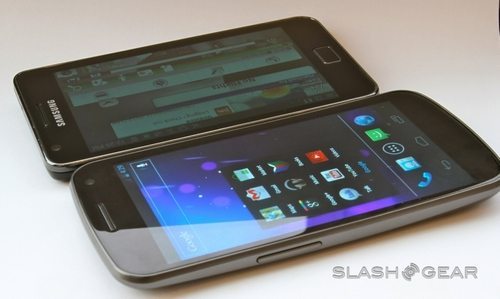 One thought on “Samsung Galaxy Nexus Gets Hands-on Treatment: Video”