For all you racing gaming fans on the iOS platform, arguably one of the most popular racing games out there for the iPhone, iPod Touch and Apple iPad is Real Racing 2, and the mobile game has been updated for iOS 5that enables the gamer to play wirelessly via AirPlay to their HD TV, and if you don’t already own Real Racing 2, now is the time to go grab a copy.

According to the guys over on iDownload blog, EA Mobile has announced via their Twitter account that the Real Racing 2 app for both the iPhone and Apple iPad has seen a price reduction of 40 percent for a limited period only.

The Real Racing 2 app with iOS 5 AirPlay mirroring a feature called “Party Play” enables gamers to connect up to four players to an Apple TV and use split-screen mode resulting in an almost “console like gaming experience,” however is for the iPhone 4S only, and we have a video demonstration of Party Play in action for your viewing pleasure below.

Real Racing 2 for iOS devices delivers in excess of the hours of racing gameplay, with the user getting to know such details cars as the 2010 Nissan GT-R (R35), the 2012 McLaren MP4-12C, the 2010Ford Shelby Mustang GT500 and more.

The Real Racing 2 app offers the chance to take control of 30 officially licensed cars with each car having unique performance characteristics, and also bring the first 16-car grid to iOS.

For those iOS user who wish to take advantage of this 40 percent reduction on the price of Real Racing 2, the iPhone version now costs $2.99 whilst the Apple iPad version costs $3.99 from iTunes. 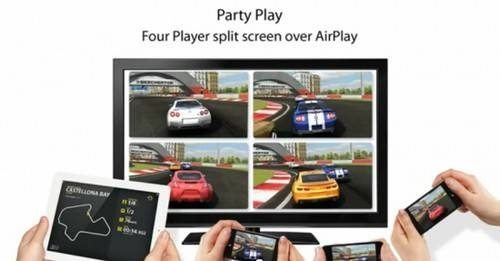