Phones Review Quickie: It appears the attraction of destroying thieving green pigs never runs out and Rovio keeps on updating their Angry Birds multi-platform game Angry Birds, with the latest update going to Angry Birds Seasons for the iPhone and Apple iPad, gaining a Halloween update in time for the spooky festivities and I’m sure this latest version of Angry Birds Seasons will prove to be just as popular as all the rest.

According to the guys over at TiPd, there are thirty new levels to appease your green pig bashing need, along with a new orange Angry Bird that albeit being somewhat small in size shouldn’t be underestimated.

Here’s the blurb from the iOS apps page to grab your Halloween gaming interest…” It was a dark and stormy night… but that won’t stop the Angry Birds! Pursue the pigs through 30 levels filled with pumpkin patches, exploding jack-o-lanterns, and creepy skeletons, lit by a full moon and eerie lantern light. You’ll get some unexpected help from a BRAND NEW BIRD — he starts out small, but don’t let his looks fool you! Complete all the levels to find some special tricks and treats!”

For the iOS faithful that want to get their Halloween gaming fix via Angry Birds Seasons you can download the update app to your iPhone at a cost of $0.99 or if you wish to play it on your Apple iPad it will cost you $1.99 from iTunes. 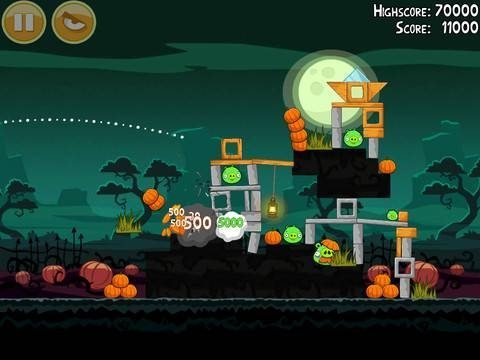