The new iPhone 4S has the voice assistant called Siri, and not to be outdone Android decided to say “Oh yeah, you haven’t seen nothing yet, if Apple can do it then so can Android” This is where it is time to say iPhone 4S Siri, stop reverse for Android iris.

Dexetra, the Android developer as decided to create a reverse of Siri called “IRIS”, this is the new voice recognition assistant for Android devices, which means Apple is not the only kids on the block.

Android users had mixed emotions when the new iPhone 4S got Siri, to some this is a great feature and to some it is a waste of time, but at last even Android device owners can check out the Siri double called iris.

What is important to remember, is that Android Iris only took the developer 8 hours to create, yes eight hours. Iris is Siri in reverse as we know now, but does it work well is another question. No need to manually search Google because iris will do it for you, gives you general information on whatever you want to know.

If you want iris to work you will need to have “Voice Search” and “TTS library” installed in your phone, most Android have these pre-installed but if they do not have it just install them. 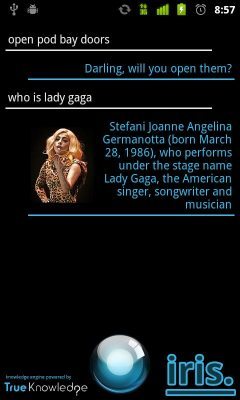 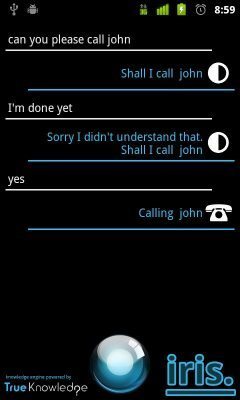 Iris for Android main features: Call someone, Text someone, Lookup for a contact, Search something on the web, Ice cream Sandwich Inspired UI and New Design, new logo.

Download Iris from the Android Market here, and let us know what you think in the comments.