According to an article over at Ubergizmo the guys over at Tmonews have managed to get hold of a T-mobile internal document that reveals just when T-Mobile plans on releasing the LG DoublePlay to its customers.

The T-Mobile internal document shows that the carrier plans on releasing the Android 2.3 Gingerbread slider just in time for the holiday season and as of the 2nd of November, so there you have it the release date for the LG DoublePlay, but as yet still no word on how much the device will hit customer pockets for.

The LG DoublePlay is a unique smartphone in as much as not only does it offer a physical slide out QWERTY, but also sports a sub-display at the centre of that keyboard, which can either independently or simultaneously show elements of the same app delivering the ability to monitor two apps at the same time.

According to the internal document (picture below), “What makes the LG DoublePlay great, is the second screen that is totally dedicated to my social life! That way you never miss a conversation and you’re always in on the action. Plus, you never have to quit games or social networks to reply, like you would with other phones.”

So does the LG DoublePlay with its twin displays and QWERTY keyboard grab the attention of any of our Android readers out there? 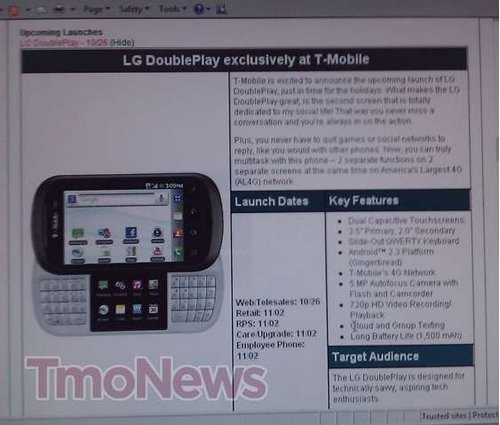