Phones Review Quickie: Apparently when old Apple first introduced the original iPhone many moons ago, the camera was added as an afterthought simply to stay in line with other smartphones in the mobile space, and since then Apple has improved on the camera with every new release with the latest iPhone 4S camera delivering the best shots.

It’s not tthat often someone comes up with an image that compares the photo quality of every iteration of a smartphone, but this has now been done and shows just how bad that original iPhone camera was when compared with today’s iPhone 4S camera.

A better image which can be seen below comes our way courtesy of the guys over at Gizmodo, and apparently Lisa Bettany snapped the same image with every iPhone to see how they differ, so the image was snapped by the original iPhone, the iPhone 3G, iPhone 3GS, iPhone 4 and finally the iPhone 4S.

The guys over at PetaPixel then stitched the images together to show just how the image quality has improved with each version of the iOS smartphone, and it does indeed show that there is one huge improvement with the iPhone 4S over the original iPhone picture taking quality.

Which goes to show that the mobile camera has come a long way since 2007 not only on the iPhone of course but on other smartphones as well as I am fairly sure back then rival handset camera were just as bad as the original iPhone, while today rival handset are at least on par with Apple’s offering and in some cases better. 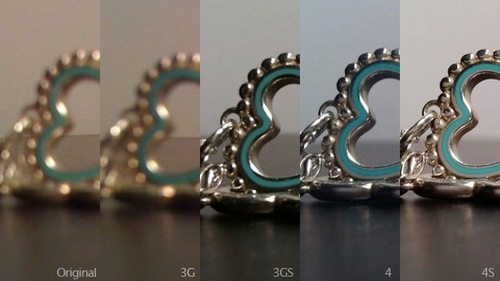