As you know old HTC pushes out a few smartphones now and then and what we have for your consideration today is a mysterious device that has been spotted in a leaked HTC internal document that shows a list of smartphones with differing SDK numbers for accessories for recently released handsets, except for one with the codename Budweiser.

The HTC internal document is brought to our attention by the guys over at Ubergizmo an by way of HTCPedia who received the document from a “credible source” and intimates that HTC might just be gearing up to release a new device called the HTC Budweiser.

This is the first time anything on the HTC Budweiser has popped up, while the document also shows such devices as the HTC EVO Design 4G, HTC Rezound, and the Apple iPhone 4S.

Other than the codename nothing else is known about the HTC Budweiser as the moment and thus it is somewhat impossible to say just what the handset will be like and of course Budweiser could always have been a codename for a previously released HTC device.

However, apparently there is an HTC event due to kick off in a couple of days so we may just learn more about this mysterious HTC Budweiser handset then although the HTCPedia guys suggest that the HTC Budweiser could be the second smartphone to be introduced during the event.

Whatever the case, one feels that if this HTC Budweiser handset is a new as unknown and unannounced smartphone from the HTC camp, HTC will no doubt change that name before the handset is unveiled, as surely if they use that particular name then beer maker Budweiser will have grounds for a lawsuit.

Anyway as it stands we’ll of course pass on anything to do with the HTC Budweiser if or when it becomes available. 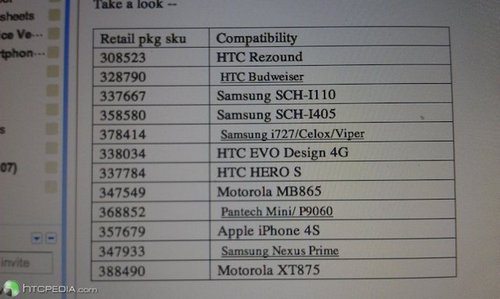