For the Android gamer out there that loves to get some alien killing action on, you can now become Duke Nukem and deliver some serious damage and get in the face of enemies in Los Angeles as the Duke Nukem 3D app is now available to download from the Android Market.

For those that have never got to grips with some Duke Nukem action now is your chance to find out just why Duke Nukem has become a gamer favourite since way back in 1991 with 18 original Duke Nukem games following.

Duke Nukem 3D for Android has been optimised for all newer multi-touch devices, now has native support for large screen Android tablets such as the Motorola Xoom, installs to the SD card by default, and dual stick or new “drag to look” controls.

Duke Nukem 3D for Android devices kicks off with episode one, with episode two and episode three available to purchase via Google in App Billing.

Duke Nukem 3D for Android has already received a few testimonials including PC Gameworld, “I couldn’t stop laughing while playing this extremely enjoyable trip through what unfolds like a 1950’s science fiction B-movie: Space Aliens Invade Earth for Women!…Duke Nukem has what most first-person shooters don’t – character!”

While Gamespot says, “It’s rare when a game comes along that really kicks your ass. With its free-flowing 3D action, over-the-top weapons, and ruthlessly attitudinal protagonist, Duke Nukem will have PC gamers worldwide rubbing their rumps with spine-tingling glee.”

Whilst user Joseph says, “Much better than the iPhone version in graphics, controls, etc. Still could use pc versions multiplayer, level music. MP best with gamefinder and 3g.”

Anyway, those Android gamers that wish to check out Duke Nukem 3D, you can download the game to your chosen Android device running Android 1.6 or above from the Android Market at a cost of juts $0.99. 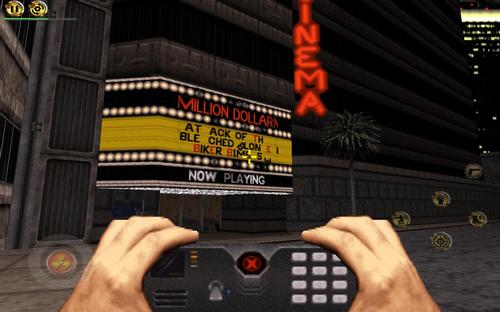 One thought on “Duke Nukem 3D for Android now available”