For those Android faithful on the Big Red who might have been hanging on to pick up the latest Android smartphone out of the Motorola camp that sports two well known brand names, the Motorola Droid RAZR, up until now it was only clear that Verizon would release the Droid RAZR sometime in November, well November is here and now we have that release date.

According to the guys over at Droid-life they have received a document from their friends with the Big Red that confirms the release date for the Motorola Droid RAZR and that date will be the 10th of this month, (image below).

The Big Red has had the Motorola Droid RAZR up for pre-order since the 27th of last month as we previously reported, and now it looks like potential customers will be able to get their mitts on the handset as of week Thursday.

Price wise as we already know, will be $299.99 when signing up for the usual Big Rear two-year term, and of course if you wish to forego that contract the Motorola Droid Bionic will hit your pocket for $649.

The Motorola Droid RAZR is also the slimmest 4G LTE enabled Android smartphone coming in at a very sweet 7.1mm so shouldn’t be too hard on the pocket.

So we’d like to know if the Motorola Droid RAZR is on any of our reader’s shopping list, and if so will you be hitting Verizon come the 10th of November to pick it up? 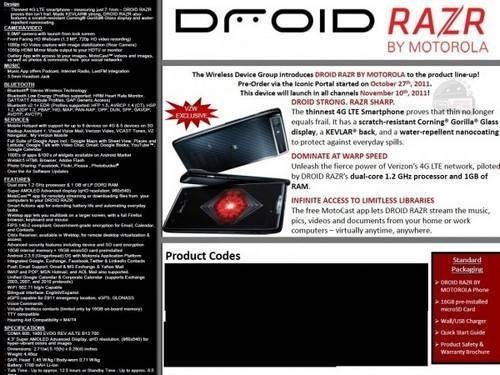