If you happen to be in the market for the Samsung Galaxy S II Skyrocket or the HTC Vivid on the AT&T network but thought you might hold off until Black Friday rolls around in the hopes you could pick up either smartphone a little cheaper, then there’s no need to wait any longer as the price of both handsets has tumbled.

According to an article over on Android Community by way of the Boy Genius Report, AT&T has now slashed 100 bucks off the asking price of both Android smartphones.

The Samsung Galaxy S II Skyrocket original price tag was $249.99 and is now on offer for just $149.99 whilst the HTC Vivid was originally on offer for $199.99 but now commands a price tag of just $99.99, presumable both depending on the usual two-year contract.

However, according to the BGR who have updated their original post, these prices vary by region with many still seeing the handsets listed at their original price whilst others are seeing the online discount of 100 bucks so it’s at least worth a shot in checking out AT&T if you are after one of the above devices. 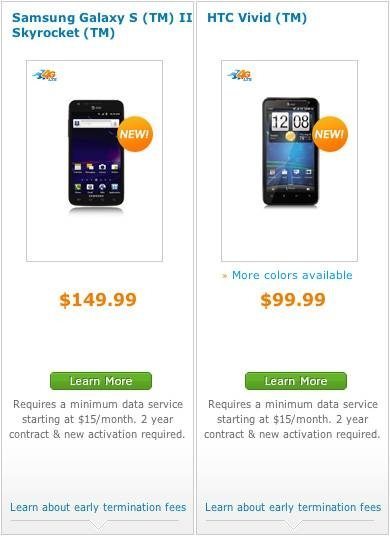