You can now open apps using Siri on your iPhone 4S, it is a long way round but works. Hopefully it is something Apple will build into the iPad 3 and iPhone 5, but we will come back to that. Opening apps using Siri cannot be done direct, and has to be done via adding contacts.

Siri allows you to use your voice to do all sorts of things, but how can you open third-party apps? There are a lot of iOS URL schemes that can help you along the way to create short cuts, like when we reported on the ability to do a shopping list using Siri via adding it to a reminder.

iDB got an idea via a forum thread to use URL schemes as contact shortcuts, so let’s say open the Facebook app using the Siri assistant. You can use many URL shortcuts that are built into the Facebook app such as: fb://profile, fb://friends, fb://notifications, fb://events, fb://feed, fb://requests, fb://notes, and fb://albums.

There are many more that can open these specific pages, follow these simple instructions: Create a new contact saying under the name “Facebook Shortcuts”, then add a few of the URL schemes mentioned above, now open Siri and ask it to open Facebook shortcuts, then simply tap on the one you want to open.

You can do this for almost anything, not nice way to do things but it works, personally we think it is pointless, but some users may find useful. We are hoping that by the time the iPad 3 and the iPhone 5 releases it will allow Siri to open third-party applications. What do you think? 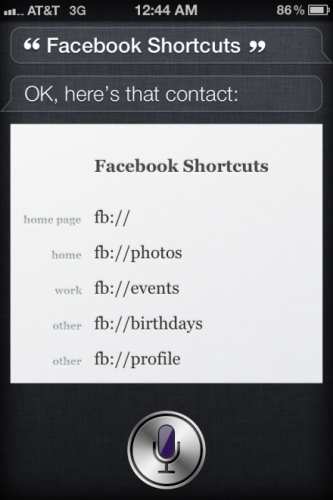