Well now it appears the United Kingdom will be gaining a new Android smartphone and tablet from the Huawei camp in the not too distant future as Huawei has now unveiled the Huawei MediaPad slate and the Huawei Vision smartphone for the UK along with prices and expected release time.

According to an article over on Unwired View by way of PC World, the Huawei MediaPad is likely to become available early in 2012 and command a price tag of Â£275 before VAT while the Huawei Vision will be available before Christmas from Phones4U as a free device on tariffs starting at roughly Â£25 a month.

So what can we expect from these two Huawei devices when it comes to specs? Well apparently the MediaPad is an Android 3.2 Honeycomb slate with a 7-inch touch screen, 5 megapixel rear facing camera, 1.3 megapixel front facing camera, 1.2GHz processor, and weighs in at 390 grams and there will be two versions of the slate, one with WiFi only and the other with HSPA+ and WiFi.

When it comes to the Huawei Vision smartphone, the handset features a 3.7-inch touch screen. 5 megapixel rear facing camera with LED flash and 720p video, a 1.5GHz single core processor, GPS, WiFi, HSDPA, a 3D user interface, is 9.9mm thick with a weight of 121 grams and runs the Android 2.3 Gingerbread operating system and will become available in 3 colours, charcoal grey, silver and rose gold.

So there you have it does the Huawei MediaPad or Huawei Vision capture the interest of any of our UK readership, if so feel free to shout out in our comments area below. 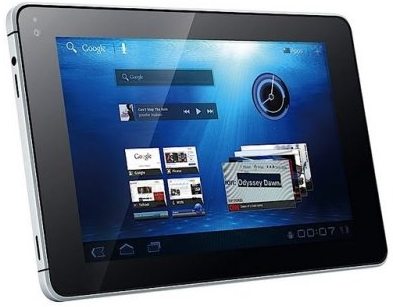