As you probably know, anything to do with Apple gear usually ends up sooner or later getting ripped off by the cloners of China, in the past we have seen many knockoffs of the iPhone in that country, and now it appears the Chinese knockoff merchants have ripped off the Apple Smart Cover.

According to an article over on Ubergizmo by way of Micdigi, if you are an owner of the Apple iPad 2 and don’t really wish to shell out the 39 bucks for the official Apple Smart Cover, all you need to do is nip over to China where you can pick one up for just $6.

The cloning merchants have been hard at work knocking off the Smart Cover, which apparently works just as well as the official iOS accessory and even appears to be manufactured in the same material.

Apparently the rip off Smart Covers even sports the words,” Designed by Apple in California, Assembled in China,” and these fake smart covers also unlock the iPad 2 and can be folded as a prop up stand just like the original, but for a fraction of the cost.

Of course the knockoff smart cover probably will never see the light of day over in the US, but it is being touted online by a firm called PBPEI, and is available in light grey, dark grey, pink and blue, and the Micdigi guys got hold of one and compared it with an original and say they couldn’t tell the difference.

So there you go, yet another Apple product cloned in China, and no doubt nothing Apple can do about it, but it does make one wonder that if the knockoff merchants can produce such a product and sell it for just $6 why Apple can’t offer the Smart Cover for less than that 39 bucks. 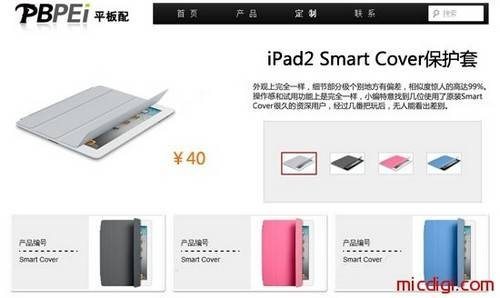 2 thoughts on “Apple iPad 2 Smart Cover gets ripped off”