Galaxy Nexus shown off by Samsung on Fox: video

For those over in the good old US of A who are hoping to snap up the latest Android powerhouse of a smartphone from the Samsung camp, the Samsung Galaxy Nexus, old Samsung wants you to have it, but apparently the launch and pricing of the first Android Ice Cream Sandwich smartphone is up to Verizon.

We know this because Samsung VP Nick DiCarlo recently showed off the Samsung Galaxy Nexus to Fox Business and we have the video of that in which DiCarlo gives the low-down on the handset.

The Samsung VP talks about Galaxy Nexus video comes our way courtesy of the guys over at Phone Arena and by way of Droid-life and lasts just over four minutes and shows DiCarlo showing off the face recognition and voice dictation features of the Galaxy Nexus.

However when it comes to the Samsung Galaxy Nexus beating the iPhone 4S, DiCarlo edges his bets by saying they are working really hard with the Galaxy brand to be as competitive as possible, and efforts are paying off.

As for the release date of the Android smartphone, all DiCarlo would answer is it will become available a little bit later this year, and when asked about the pricing of the handset, again DiCarlo edged by saying hopefully Verizon will let us know soon.

Anyway, for those that simply can’t get enough of Samsung Galaxy Nexus footage, head on down and mash that play button to see the device you could be holding in your hands in the not too distant future…enjoy. 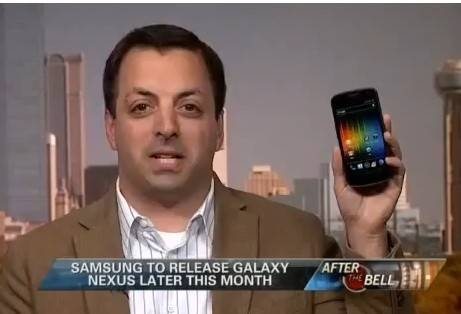