Now obviously the smart feature on the new iPhone 4S is of course the Siri voice assistant, a fairly intelligent feature that lets you are questions and receive answers, however, it would appear that simply voicing those questions to Siri isn’t enough and the way ahead is not to have to vocalise but rather simply think those questions.

And we have a couple of videos of the guys in action apparently using simple thoughts to get Siri to work on the iPhone 4S, videos that come our way courtesy of the guys over at Daily iPhone Blog, and the first video delivers an explanation on how these guys achieved their goal.

I wont bore you with all the technical jargon on how they did it, as you can read it for yourself by viewing the blurb on the first video’s page, but generally what you do is slap some wired pads to your head, wire them up to an Arduino board that is linked to the iPhone 4S and bingo.

Anyway, personally I’m not too sure whether this mind control of Siri is real or fake as it is somewhat easy to edit video footage to make it look as if your thoughts are doing the controlling, so I am sceptical to say the least.

So head on down and hit those play buttons to check out the Siri being controlled via the mind and then let us know if you believe it is the real deal and is a good way forward for controlling Siri, or if you, like me, think its all bunkum. 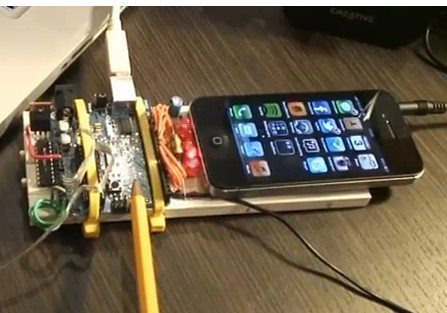 One thought on “Siri mind control on iPhone 4S: videos”